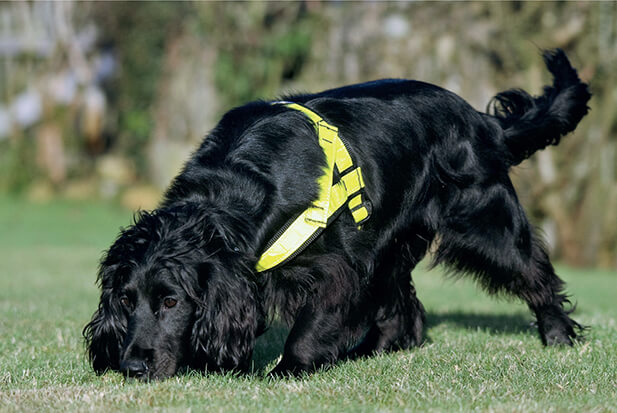 When a dog becomes a cat’s best friend, the Country’s first
Cat Detection Dog is ready for action!

A rescue dog whose future looked bleak now has a promising career finding lost cats thanks to an animal-loving private detective and the charity Medical Detection Dogs.

Over the past decade, more than 100,000 cats have been reported missing in the UK (and many of these die if they cannot get access to regular meals or if they find themselves trapped in sheds or outbuildings.

Guildford-based pet detective Colin Butcher, who has been tracking down lost and stolen pets for a decade, receives at least 15 calls a week from distraught cat owners whose pets have gone missing.

If Colin is contacted within 24 hours of a dog going missing, there is an 80 percent chance that he’ll find it.  But with cats, it is much more difficult to locate them and timing is very important.

Colin says: “The problem is that cats go to ground when injured or sick. They can also get locked in sheds or outbuildings by mistake. As cats get very stressed in strange places this trauma is exacerbated as cats cannot survive without food or water for very long, and risk going hypoglycaemic. I needed something to help speed up the search for lost cats and I’ve found just that in Molly.”

Molly, a rescue working Cocker Spaniel, has been trained as the world’s first Cat Detection Dog by Medical Detection Dogs – the ground-breaking charity that brought us Cancer Detection dogs and Medical Alert Assistance Dogs for people with life-threatening conditions, such as diabetes. Molly’s huge sense of smell and olfactory capacity (over a million times greater than a humans’) has been harnessed and now Molly reliably scent discriminates for not any cat, but the specific missing cat. As Molly has a keen working disposition, she rises to every challenge and will not give up on a search.

Dr Claire Guest CEO of Medical Detection Dogs said: “When Colin approached us about a Cat Detection dog and explained the huge distress that is caused to both the cat and the owner when cats become lost, I was sure that with our expertise we could help.   Molly was a rescue dog, on her third home due to her strong working disposition making her an unsuitable family pet. We could see she was very intelligent and following several months’ scent discrimination training she can now use her nose to ‘detect’ a specific individual cat. Molly underlines the amazing adaptability of dogs to channel their incredible sense of smell and by training dogs with specialist skills such as Molly we can boost our fundraising to train more dogs to save human lives and in Molly’s case help save cats lives too!”

Since finishing her training Molly has helped to recover 145 missing cats and assisted in the recovery of 9 missing dogs and several missing reptiles her 100th recovery was a cat named ‘Houdini’ who had escaped from a cattery in the Devil’s Dyke, Sussex.